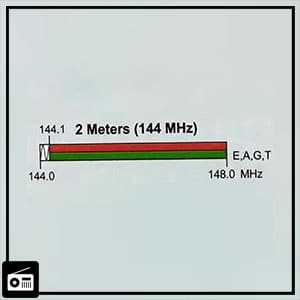 Amateur radio, also known as ham radio, has some specific frequency bands for their work which is called HAM radio bands. Ham radio band allocation can range from a few centimeters to 2200 meters. Of these radio bands, The 2 meter ham radio band is probably the most popular and widely used.

The 2-meter band is a very high-frequency band whose allocations typically range from 144 MHz to 148 MHz.

In this article, we will discuss the 2 meter amateur radio band, 2 meter ham radio frequencies, and its characteristics.

What is 2 Meter Ham Radio Band?

The 2 meter HAM radio band is part of a very high-frequency radio spectrum consisting of frequencies ranging from 144 MHz to 148 MHz in the International Telecommunication Union (ITU) Territory.

The 2 meter radio band is easily accepted by most scanners. It has the advantage of having small antennas and is able to get high profit from them, even in a city space.

How Does A 2-Meter Ham Radio Band Work?

For 2 meter FM operations, local amateur radio operators use a radio repeater, a transmitter, and a radio receiver that instantly resends a received signal at a different frequency.

Repeater station is usually located on high ground, such as a hilltop or a high-rise building, where terrain extensions can be seen. This allows ham radio operators to expand their coverage area, often 180 miles to 200 miles.

Use of 2-meter band

Ham radio operators usually use 2-meter bands for communication. You can hear normal conversations while listening to the 2-meter ham band.

The band plan is proposed by the ARRL Advisory Committee to avoid interference in incoherent mode. The 2-meter band plan supports a variety of operations.

Why 2m radio band is a popular choice?

Besides, The 2-meter radio band is reliable and its equipment is affordable. You can use it with a small handheld transceiver or a mobile transceiver.

Although the 2 meter band is known as a local band for short distances communication, you can also use it for long distance of ham radio communication if you want.

So do you still have anything left to know about 2 meter ham radio band? I don’t think so.

To know more about the 2-Meter radio band, you can contact the American Radio Relay League or visit their website.