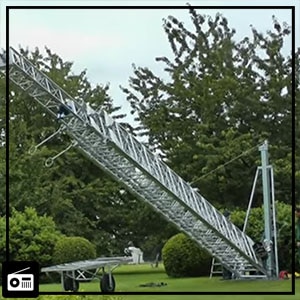 Amateur radio, also known as HAM radio, is used to communicate with people all over the world. A ham radio station lets you talk to people in cities, around the world, and even in space, without the internet, cell phones, or other electronic devices.

However, to set up a ham radio station in order to communicate with others, you may need a portable HAM radio tower. A tower is a very powerful tool that lets you host and broadcast your HAM radio equipment.

I think you are looking for a complete guide on the tower of the HAM radio, and that’s why you are here. Well, let’s explore everything you should know about this.

Everything About Ham Radio Antenna Tower

A radio tower is a steel frame used to securely support certain types of antennas or cameras. A ham radio tower provides broadcast coverage for your HAM radio system.

To get maximum broadcast coverage and unwavering service, a ham tower must be carefully selected and planned.

What Are The Things To Consider Before Installing A Ham Radio Tower?

There are many things to consider before installing a ham tower. The first thing to do is make sure your local city authority allows you to install an amateur radio tower in your area of ​​residence.

One of the most important factors to consider before installing a ham tower is its location. The location of the tower will control many aspects of its operation, and so you must consider whether your location is good for installing a ham radio tower.

Here are some other things to consider before installing a ham tower:

When installing a tower, it is important to make sure that your foundation is immersed in concrete at the right depth.
You should also consider whether the tower is able to get signals during local climate changes such as freezing rain, max winds, thunderstorms. This allows you to use ham radio during any climate disaster.

Ham radios for preppers are always ready in case of any catastrophic incidents. Because it is the only option where preppers can communicate when the communications systems fail during local emergencies such as climate disasters.

Ham radio towers can be of many types. Each of these types has its own specification and installation requirement.

Guyed – The guide tower is the most profitable when it comes to cost per foot. However, you need to have sufficient space for the wires.
Tilting or Fold-over – This tower is very useful for those who do not want to climb the tower while working on the antenna.
Crank-up – It may be the most expensive out of all towers.

How Much Does A Ham Tower Cost?
The cost of a tower varies by geographic location and size of the tower along with its requirements. A normal tower usually costs around $100. But the entire tower may cost between $5-10,000 including its antenna, place, concrete, and labor.

Verdict
So do you still have doubts about Ham Radio Tower? I don’t think so.
But if you have, then you should contact some experienced HAM to assist you with the preference and installation.

But I believe that following the guidelines given above, you will get the maximum benefit from your radio tower and your journey as a HAM will not be unpleasant.