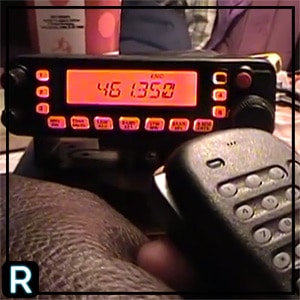 Probably, you are now ready to make your first call on a ham radio. At this stage; you need to switch your radio on.

Just after a bit of tuning; you can hear sounds like “CQ” “CQ” or “AC6V” and so on. You may hear such expression repeatedly- about three times. Don’t worry; these are all operators’ call signs.

Usually, as an operator, you should not say A, B, C and D on air. Instead, they say Alpha, Bravo, Charlie, Delta and so on.

So, if you hear those expressions, in details, they mean Charlie Quebec for “CQ”.  “AC6V” refers to Alpha Charlie six Victor. In some cases, you may hear call signs that have a combination of some English words.

It is very essential to know all the English alphabets spoken by ham radio operators. For example, they may say alphabets such as C to mean Charlie, B to mean Bravo, and A to mean Alpha. However, there are others.

You should memorize the following letters if you are a ham operator.

AC6V, DF2A “means Alpha Charlie six Victor, Delta Foxtrot two Alpha, Over,” which literally means “thanks for your call.” When you respond; you must press your microphone button and then respond.  Always remember that when you are replying to somebody, you should repeat your call sign at least 3 times in order to ensure that the other hams understand.

However, when the connection is clear; you can repeat only two times. It is important to know that some of the hams use repeaters while others do not.

The process of Morse code calling is almost similar to above call. However, in this case, they use code “DE” and “K”. DE means ‘from’ and K means ‘end of transmission’. So, when you hear the expression from Morse code “CQ CQ CQ DE AC6V AC6V AC6V K”, you should say “AC6V DE DF2A DF2A DF2A K” to respond.

Respectively, this is the pattern of calling as well as the pattern of replying in Morse Code. In response; you may also hear “DF2A DE AC6V TKS” for these calls. TKS in this case means ‘thanks’.

However, if you try to get into contact with someone but get no response don’t be hopeless. Your radio signal might be too weak for others to hear.

In such cases, choose another ham radio station to call. It may be possible you be heard by some other stations, while others won’t due to weak signal. If your signal is strong enough, there are several other things that could cause you not to hear the person on the other end.

☛ 1. The other operators might be calling at the same time you are calling. That is called overlapping. So, just wait for some time before you can call again.

☛ 2. It is possible that someone hears you but cannot understand clearly what you are saying. In this case, you might hear “AC6V calling—please come again” or you can hear “QRZed”. Alternatively, you may hear “QRZ” to mean, “Who is calling me?” Then you go for calling again.

☛ 3. Sometime the calling station mis-states your call sign by a single letter or a small error. So, wait for some time and then repeat calling.

☛ 4. If, however, you repeat several times and fail, then try to contact someone you know via telephone and request him to call on your behalf.  In case you still can’t get any signals; be sure that there is a problem in your radio equipment.

Set Up Your Ham Radio to Call

Before you choose to call from ham radio by simplex or repeaters, you should follow the user’s manual and ensure you follow the following procedures.

When a ham operator gets a technician license, he is eligible to access the entire amateur VHF and UHF bands. Nonetheless, FM repeater is the most common mode of communication within these bands. As we have learned, a repeater listens to some signals in a certain frequency, then repeats in another frequency.

This operation is called as duplex operation. This is because it takes place simultaneously. Repeaters generally use FM transmission since they are simpler.

This simpler case is conducive in protecting equipment and offers clearer contacts. If, however, the repeater is set on the top of a high building; it can easily catch very weak signals even from a portable handheld radio.

Always note that only the professional ham radio organizations should maintain the repeaters. Alternatively, a ham operator who must be an expert can provide the services to the community.

All radios and repeaters are immune to interference. So, the use of tone access plays the role of reducing the interference made by other repeaters and other surrounding strong signals. Tone access will essentially block all output frequencies of a repeater except for some specified frequencies.

DCS (Digital Coded Squelch) will also help to reduce interference from nearby strong signals. DCS can also block all signals digitally. However, not all repeaters can access the DCS tone.