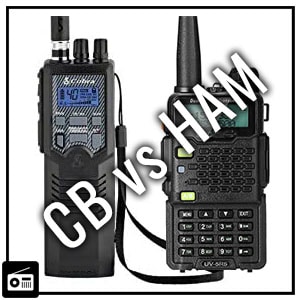 CB Radio and Amateur Radio are two of the most popular radio services. Both CB Radio and Ham Radio make communication between family, friends, and colleagues fun and fulfilling.

However, when it comes to the difference between ham radio vs CB radio, some people get often confused because of their similar usage. If you are one of them and want to know what are the main differences between Hum Radio and CB Radio, you have come to the right place.

The main difference between ham radios and CB radios is that their method of use are different and they both operate on different frequencies.

In this article, we will highlight some of the major differences between ham radio and CB radio that may help you choose which one is right for you.

Ham Radio Vs CB Radio – Which One To Choose

You can see there are many Distinctions between ham radio and CB radio. But the important question is, which of these two radios will work best for you?

HAM radio, also known as Amateur radio is used to communicate with people all over the world. It communicates using electromagnetic radiation by sending morse code, data, and voice around the world.

Ham radio works at specific frequencies. There is also a dual band mobile ham radio which allows the user to operate on 2 different frequencies.

If you are a person who always needs to communicate with people over long distances, then you need a ham radio. Ham radio can work without any network or internet. So it can be very effective for you when the network is unavailable in your area.

CB Radio is a short-term citizen band radio. It is mostly used for short distances communication. CB radios operate on 40 channels in the high-frequency band around 27 MHz.

If you are a person who wants to communicate every day over short distances for personal purposes, CB radio may be for you. You can use it for commercial purposes as well.

Users can fix ham radio damage themselves, but CB radio users are not allowed to fix any damage or problems of their CB radio.

The comparison table below will give you a clear idea of ​​the difference between a ham and a CB radio.

Ham Radio Or Cb Radio. Which One Is Better?

Ham radio and CB radio both are very different and work in many ways. So it would be inappropriate to call one “better” than the other.

CB radio is great if you just want to talk to people. It has a small, limited slot in the 27Mhz frequency spectrum, that allows you to talk to family and friends in a short distance.

However, If experimenting is something that interests you, then ham radio is the way to go. You can use a lot more transmit power on the ham radio.

Ham radio is effective for long-distance communication, especially in emergencies.

Well, with all things considered, Ham Radio can be a better choice for you in terms of communication.

Although both CB radio and ham radio are used for communication, they are created for two different purposes, as a result, their users are different.

So, do you have any more misconceptions about Ham Radio vs. CB Radio? I do not think so.

And I’m sure after reading this article, you can now choose which radio is best for you without any hesitation.