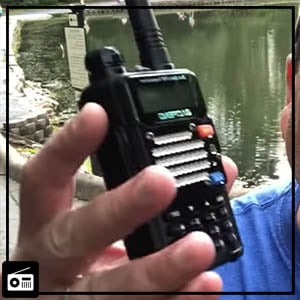 Ham radio range is not specific as it depends on many factors such as the frequency you are transmitting and the output power of the transmitter.

But you can normally reach about 2-18 miles with the help of a handheld ham radio without using a ham radio base station antenna.

So how far can you talk using the ham radio? That’s what we’re going to find out in this article.

As we mentioned above, ham radios have no fixed range. It mostly depends on the power, antenna configuration, frequency, and atmospheric conditions.

Ham radio distances are often determined by bands and frequencies. How far you can talk using a ham radio depends on the frequency you are using. There are many frequencies used by ham operators such as MF, HF, VHF, and UHF. So which frequencies can reach farthest?

Let’s figure it out.

UHF Vs. VHF: Which Reaches Farthest?

VHF: The wavelength of VHF or very high frequency is longer than other frequencies. As a result, it is possible to travel much farther and with less interference by using this frequency.

Using a handheld device, you can reach around 5-10 km by transmitting signals on VHF. With a low-power home station and a common antenna, VHF will have a range of about 50 km. On the other hand, using a powerful antenna and high power, you can reach about 1000 km by sending a signal at this frequency.

UHF: UHF or ultra-high frequency usually has shorter wavelengths than VHF. It is typically used for cell phones, walkie-talkies, Wi-Fi, Bluetooth, and GPS.

Usually, it can communicate over a distance of more than 30 miles. UHF is better for indoor uses as it has shorter wavelengths. It also has a small antenna. Although it can communicate and goes long distances, it is not as effective as VHF.

Both VHF and UHF go long distances. However, if you compare VHF & UHF, the UHF signal can go a greater distance than VHF.

How Can You Expand The Range Of Your Ham Radio?

To increase the range of your ham radio, you have to use a large antenna. Antennas have a big impact on how far ham radio can reach. You can get a good range using a long antenna.

You can use a repeater as well as more power to increase the range of your ham radio. Consider using a ham radio antenna tuner to avoid potential damage due to excess power applied to a transmitter.

Finding the absolute ham radio range is not as easy as it may seem. The range of your ham radio can vary depending on the type of frequency used, the height of the antenna, and the terrain.

In this article, we have tried to cover the important topic of determining the range of ham radio. I hope after reading this article, you now know the answer to how far a ham radio can reach.